As already described, the whole concept of the walking safari first originated in Zambia under the guidance of the legendary Norman Carr.

Since then its implementation has followed a fairly standard route, involving series of camps all owned by the same operator.

Now AfricaAway has taken this concept a whole step further.

As can be seen from the map above, Zambia contains numerous National Parks, rivers, and other features. So far as tourism generally is concerned, South Luangwa remains the principal such destination, closely followed by The Lower Zambezi, and then, much less so, North Luangwa and Kafue.

However serious walking safaris have hitherto only taken place in South Luangwa, where the main operators who have walking safaris on offer here are Norman Carr Safaris, Robin Pope Safaris and Remote Africa, their locations being depicted below, together with those devised by ourselves. 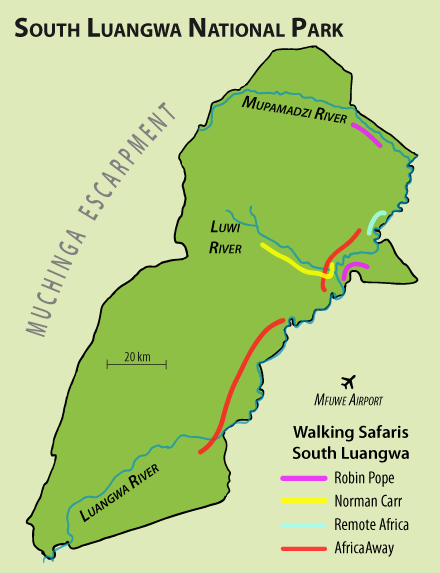 Not surprisingly, the principal walking safari itineraries in Zambia continue to be offered by the 'Norman Carr Safaris' company. In addition to their home lodge of Kapani, NCS operate a series of three bush camps - Luwi, Nsolo and Kakuli, which are strung out along the length of South Luangwa's Luwi River, offering a marvellous camp-to-camp trek, after which it is also possible to spend a night or two at their nearby luxury riverside Mchenja Camp, following up with a final night at their new Chinzombo Lodge - the map above shows the general location of these camps, further details being shown here.

This takes place in the Mupamadzi River area situated at the north end of South Luangwa. The accommodation takes the form of temporary fly tents, which are taken down each morning and driven around to their next location, while guests make their own way there on foot. This is about as far from 'civilisation' as it is possible to get.

Somewhat closer to civilisation, being situated in South Luangwa's Nsefu Sector, this itinerary follows a similar pattern to the mobile walking safari, using a combination of temporary fly tents and RPS permanent lodges. Note that, although fly camping represents the ultimate in getting down to bush basics, it may not be for everybody, especially the elderly or arthritic.

Again the locations of these two itineraries are indicated on the map above, with further details shown here.

Remote Africa's operation follows a similar pattern to that of NCS, a stay at their main lodge, Tafika, being followed by an on foot trek between their two bush camps, Chikoko Tree Camp and Crocodile River Camp. The general location of these camps is also shown above, again with further details being provided later. Note that fuller details of each of the camps mentioned can be found on our main www.ZambiaAway.com website.

It is also possible to take walks on a day by day basis from any of the camps and lodges in South Luangwa, and indeed also in the North Luangwa, Lower Zambezi and Kafue National Parks, although extensive walking safaris, of the type described above, are not generally on offer here..

What AfricaAway has done is to take a step back, and look at the whole walking safari concept with fresh eyes, to come up with its own unique product: click here for the philosophy behind our approach, and here for our actual itineraries, both in South Luangwa and elsewhere. 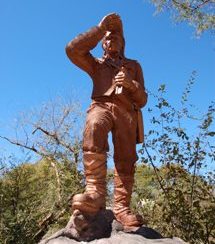 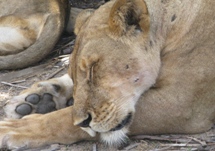 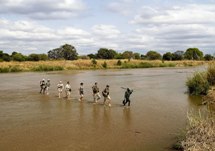