The Various Types Of Walking Safari

The term ‘Walking Safari’ can actually reflect a wide range of activities:

A 'Bimble in the Bush': In those locations where walking is permitted most camps will offer the opportunity for a one to two hour walk in the vicinity of the camp. If you’ve never taken to your feet in the bush previously then this can be quite instructive, providing as it does the opportunity to look at things – tracks, droppings, insects, bushes and trees – that rarely get seen whilst blasting through the bush in a vehicle. However it is rarely an energetic activity, of the kind that the true walker relishes, and in truth may actually never stray very far from the vicinity of the camp, and may not include many actual game sightings.

Half Day Walks: More serious excursions may be undertaken in other locations, although – dependent of course on the season, it is usually too hot to walk in between about 11.00 a.m. and 4.00 p.m., and hence the restriction to around half a day. As with all walks, you will be accompanied by a guide and armed Park Ranger, and sometimes can even get closer to big game than you do in a vehicle.

Mobile Walking Safaris: This is getting much closer to the original concept of the (modern tourist) walking safari, trying to recreate the journeys undertaken by those early, Edwardian, explorers, on which much of the current ‘safari’ concept is based. Here you will typically stay overnight in temporary tented accommodation (fly camps) which is taken down each morning, and then driven, together with your baggage, to your next camping site, and re-erected there, while you yourself get there on foot.

This now is the ‘true’ walking safari, undertaken through the African bush (rather than just around camp), on a place-to-place basis: there is nothing to beat the sensation of arriving in a (new) camp, after a strenuous hike through wild countryside. For a really good walk you need a plan and a purpose, and we are achieving this here. However the mobile walking safari concept often suffers from the somewhat basic nature of the accommodation used – smallish tents, in which standing up may be difficult, bucket showers and long drop loos. It’s a bit too basic for many people.

The Classic Camp-to-Camp Walking Safari: This for us is the ultimate walking safari experience. Rather than striking camp each day, the walk simply takes place in between two permanent camps – usually bush camps, but exhibiting a much greater degree of comfort than do fly camps.

In Zambia, where the walking safari concept was first developed in the early 1960s, by the legendary Norman Carr, such camps have traditionally formed a circuit under a common ownership, for example the Luwi, Nsolo, Kakuli, Mchenja route provided by the modern day Norman Carr Safaris company.

However there is actually no reason at all why such an itinerary should not take place between camps belonging to different owners, and it is precisely this idea that is one of the key factors that has underpinned our revolutionary new ‘Zambia Walking Safaris’ concept, as described in more detail in 'Walking In Zambia'. 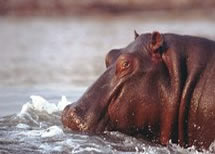